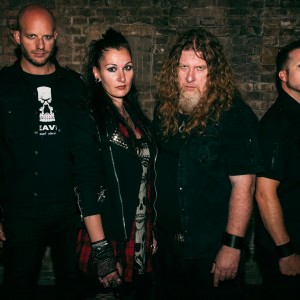 Downcast Collision will sweep through the world with a plague of heaviness!

Modern Metal band Downcast Collision came to life in another dimension in space and time.
By chance its members were cast down to collide with this universe. Here the laws of nature work differently, which makes the band feel misplaced and angry. Stuck in this world, all they can  really hope for now, is to find a way to merge both worlds into one. How that will end, no one yet knows.

Musically Downcast Collision sounds like dark science; heavy, killer riffing and without much subtlety. Bold songs and dark vocals that deal with themes such as: violence, plagues of the undead, the visions of Lucifer, the killing of teenaged bullies and even travelling through another dimension to find clairvoyance. All that, while still managing to sound catchy enough for the melodies to get stuck in your mind and to never leave again.

Downcast Collision is the shadow side of love; it is the downside of up. It is the evil twin you secretly wish to be …
RISE UP, the debut album by Downcast Collision will be brought into existence early 2017
Website: http://www.downcastcollision.nl/band.html